Voice MagBlogsPrincess Di and the…

Although LGBTQ+ history month has come to an end, it’s not too late to explore figures idolised by the queer community. Today, I’m finding out just why Princess Diana is so revered by taking a closer look at her friendships and charity work.

The People’s Princess Diana Spencer, is known to many as the mother of Prince William and Prince Harry, wife of Charles. But to the many in the LGBTQ+ community, Diana is known as a gay icon. Her recent portrayals by Emma Corrin in the Netflix series The Crown and by Kristen Steward Spencer has presented Diana’s life in different lights; interestingly enough, both actors are part of the queer community. Corrin, in particular, presented the subtle rebellious and youthful side of Diana - but how does a young aristocrat become a gay icon. I want to explore just how this special relationship has come about and resulted in the love she still holds today.

Diana was known to have several close friendships with gay men, including George Michael, Gianni Versace and Freddie Mercury. Actor Clea Rocos even claims that when spending time with Mercury, he convinced her to join him at a gay bar, and she dressed as a man to conceal her identity. Elton John, another close friend, famously rewrote and performed ‘Candle in the Wind’ at her funeral. One of Diana’s closest friends and butler, Paul Burrell, served the princess until her death in 1997. When Burrell came out as gay in 2017, he claimed that only Diana had known about his sexuality and later married his long-term male partner.

It’s not just Diana’s friendship with gay men that makes her so iconic. One of the well-known parts of her work was attempting to alleviate the stigma surrounding HIV and AIDS. In 1987, at the height of the AIDS crisis, Diana opened England's first HIV/Aids unit at London's Middlesex Hospital. Despite plenty of scientific evidence that HIV and AIDS could not be passed on by hugging or shaking hands, fear was extremely powerful. Gay men were shunned for fear of the disease, thrown out of their jobs and kicked out of their homes.

But Diana not only visited a hospital where patients were being treated for the so-called “gay plague” but touched those who were infected, sending an incredibly radical and influential message to the public. She held hands with an AIDS patient in one of her earliest efforts to de-stigmatise the condition and noted: “HIV does not make people dangerous to know. You can shake their hands and give them a hug. Heaven knows they need it.” She went on to explain that those living with HIV could share homes and lives with those without it. “We all need to be alert to the special needs of those for whom AIDS is the last straw in an already heavy burden of discrimination and misfortune.” She became a patron of the National AIDS Trust until the time of her death in 1997.

She’s not the only straight woman who’s become a queer icon: the most famous being Judy Garland. The Stonewall Riots occurred from 28 June until 3 July 1969, and Judy Garland had passed away at the end of June and was buried five days later on the 27th. Gay men were known to flock to Gartland’s theatre shows. It is said they admired her abilities as a performer, and related to her struggles at the height of her fame which many felt mirrored their own. A collective grief over this incident grew, and alongside this, the raid on the Stonewall bar led to the beginning of the Riots themselves, which today are remembered during international Pride protests. Although the Riots didn’t begin because of Gartland, her death had a lasting impact on the queer community and added to an emotional outburst of the following protests.

Similarly, when we look at Diana’s life from being thrust into the public eye extremely young, strained romantic and familial relationships, and being different from others in the family, it becomes clearer why queer people felt so connected to her. As is now well known, Charles was having an affair with Camilla, a relationship that had begun even before Diana and Charles were married. They first met when Diana was only 16, at which time Charles was 29 and dating her sister. She was engaged at 20 and married by 22. Despite her situation, she attempted to be a loving mother, a caring wife and a princess. She, like many, was rejected by those supposed to have cared and protected her - namely the Queen and Prince Philip. Diana claimed that Philip, in fact, said to Charles, “if your marriage doesn’t work out, you can always go back to her after five years”. She became an outsider in her own family.

This is what truly places Diana in her iconic position: her determination and grit in the face of a somewhat terrible situation. We all love and idolise her because we see something of ourselves in her, whether it’s the struggle to fit in or very public family problems. And tragically, it is also her untimely death that keeps in the hall of queer legends. While the UK only had a relatively small HIV epidemic, an estimated 101,600 people were living with HIV. In 2017, there were 468 AIDS-related deaths. The best way to honour the People’s Princess is by continuing to support the cause she supported, raising awareness of the continuing struggle of the LGBTQ+ community and raising awareness of the issues she dedicated her life to.

Donate to the Terrence Higgins Trust here, a charity uniting those in the fight against HIV. 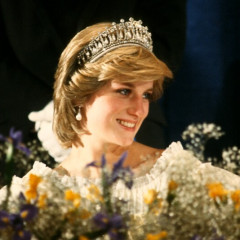 Princess Di and the Queer community

Although LGBTQ+ history month has come to an end, it’s not too late to explore figures idolised by the queer community. Today, I’m finding out just why Princess Diana is so revered by taking a closer look at her friendships and charity work.