We take a look at the oeuvre of one of the most acclaimed filmmakers ever, and attempt to rank his work from worst to best.

Stanley Kubrick, who is widely considered to be one of the greatest filmmakers of all time, made an impressive variety of films during his career. From science fiction to horror, period pieces to comedy, he created films in several genres and managed to garner near-universal acclaim along the way. Ranking his films will be difficult considering how brilliant they all are in their own right, but here goes…

Kubrick’s debut feature was a very low-budget film with a thin (and bland) story, poor editing, and frankly bad performances. Kubrick himself denounced it as amateurish and did not want to be associated with it. It’s not all bad, though. There are some shots that are really quite excellent, especially in contrast to how mediocre-to-awful the rest of the film is – moments where the director’s potential shined through. Still, “Fear and Desire” is only one to watch if you’re either a big Kubrick fan or some sort of cinematic completionist.

His debut was bad, but it seems Kubrick learned from a lot of his mistakes for his second feature. I still wouldn’t label “Killer’s Kiss” a good film, but it is far closer to being one than “Fear and Desire” ever was. The story is again dull, the first half is bland, and the dialogue is horrendous half the time. (There’s a scene where two people recite their life stories to each other over breakfast, which is quite possibly the least interesting way you could share their backstory.) It picks up a lot in the second half though, and there’s a quite fantastic chase scene across some rooftops that shows Kubrick’s potential more than anything else from his first two feature films. A bit of a mixed bag overall, but with more bad than good.

“Spartacus” is apparently the only film Kubrick didn’t have full creative control over, as he was brought on board to take over from director Anthony Mann after a week of shooting had already taken place. Unfortunately, it shows. This film is famous for being a sprawling epic with lots of characters and great actors and a behemoth 197-minute runtime… but it doesn’t need to be. It could have easily been two and a half hours. There are also very few moments in “Spartacus” that thrill. It’s never bad, and some parts are great, but if you’re going to invest over three hours of your life into a film, it really ought to do more than be occasionally entertaining.

This adaptation of Nabokov’s controversial novel is good, but it pales in comparison to Kubrick’s best work. The novel doesn’t really lend itself to adaptation anyway (which seems to be something Kubrick took as a challenge, with the film’s poster reading “How did they ever make a movie of LOLITA?”) not just because of the subject matter but because the book is written (with brilliant prose) from the perspective of unreliable narrator Humbert Humbert. The prose is a large part of what makes the book work, so a film adaptation was always going to feel like there was something missing. Still, it is interesting what Kubrick does with it, and it’s worth a watch, especially if you enjoy the novel it’s based on.

This is where the ranking starts to get really tough, because all of Kubrick’s top ten films are fantastic. The differences truly are marginal. “A Clockwork Orange” is famously controversial for the violence it shows, but the violence isn’t without a purpose. Unfortunately the entire point of the violence (and the film as a whole), however, is far more overt and didactic than anything else Kubrick made. (Except maybe the anti-war themes he often had, but that feels different somehow, and far less didactic.) This is a fantastic film regardless, but there has to be some reason to put it ninth.

One of the most famous war (and anti-war) films of all time, and with good reason. “Full Metal Jacket” is a magnificent movie, and the only reason it comes in at number eight is because the first half is almost universally more adored than the second half. As far as I’m concerned it is brilliant from start to finish, but R. Lee Ermey as Gunnery Sergeant Hartman is one of the most memorable characters of all time, so when he is killed in a shockingly brilliant climax to the first half, it does make it difficult for what follows to leave the same impression.

Unhinged General Jack D. Ripper orders a nuclear strike on the Soviet Union, and chaos ensues as politicians and officials frantically try to prevent it. “Dr. Strangelove” is one of the most beloved comedy films of all time. Kubrick adapted the deadly serious thriller novel “Red Alert,” and turned it into a black comedy by cranking up the absurdity, with Peter Sellers playing three different characters and the majority of the cast acting like belligerent children. Part of the film’s genius is that visually, it plays like a sobering tale of the dangers of nuclear weapons, while the dialogue is utterly ridiculous. The result is an endlessly quotable comedy, and thanks to the unending incompetence of government officials in real life, it will never not feel relevant. “Gentlemen, you can’t fight in here, this is the war room!”

Kubrick’s first war film was only his fourth feature, and it is among his best. It is gripping and entertaining, stunning yet harrowing, and by the end, incredibly poignant. The crossing of No Man’s Land is formally exquisite, the characters are rich and memorable, and the entire thing takes place in just 88 minutes. It’s beyond impressive, and what’s even more impressive is that a film this good doesn’t even make the top 5 of its director’s work.

“The Killing” was only Kubrick’s third film after “Fear and Desire” and “Killer’s Kiss” which is absolutely bonkers considering the quality of this one compared to his first two efforts. “The Killing” is a noir film about a group that is planning the heist of a money-counting room of a racetrack on one of its busiest days. It is one of the best noir films ever made, and quite frankly one of the best films ever made, and it is a travesty that it is often left out of such discussions. The final line (which I won’t spoil here) is every bit as good as the iconic “Here’s looking at you, kid” from “Casablanca.”

If ever a film perfectly personified the phrase “every frame a painting,” “Barry Lyndon” did. If films were judged on the basis of their cinematography alone, this movie would rank first in every list ever created. Technical and technological innovations were involved in the making of this film, and it truly shows, because the cinematography is sublime. Beyond that, though, it’s a wonderful, perfectly paced rags to riches story with countless memorable scenes and characters, and its 3 hours fly by.

An enthralling horror about a mysterious hotel and the family living there, “The Shining” has become one of the most beloved horrors of all time and one of the most acclaimed films ever. Iconic in countless ways, and well deserving of the number three spot on this list.

Perhaps an unconventional choice for the number two spot, with several iconic and influential films being placed lower, but “Eyes Wide Shut” is one of the most hypnotic films you’ll ever watch. The sheer amount of subtext and innuendo make it endlessly rewatchable and dissectible, and the enthralling story makes it enchanting to watch even if you aren’t thinking about the themes. Again, the dialogue here is magnificent, and the final line is one of the best in cinema history.

Frequently cited as one of if not the greatest film of all time and one of the most influential films ever made. A favourite of practically every great filmmaker since 1970. Some of the best uses of classical music ever. It still feels ahead of its time over 50 years later, and still looks better now than most contemporary films. As close to universally adored as a film can be. A true epic in every sense of the word. How could this masterpiece ever be anything but 1st? 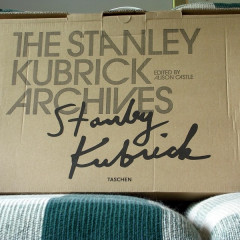 We take a look at the oeuvre of one of the most acclaimed filmmakers ever, and attempt to rank his work from worst to best.