Bigotry of various kinds is still rampant in football today, and more needs to be done

The recent arrest of Mason Greenwood following allegations of sexual assault and rape is one of many similar stories in the footballing world in the last few months. Another recent major story was the arrest of Manchester City player Benjamin Mendy, who was charged with seven counts of rape and one count of sexual assault against five different women. Thankfully, to their credit, the respective clubs have handled the situation as best they could, cutting ties with the players as much as they are legally allowed to and condemning the behaviour.

On the flip side, though, it does make one wonder if anyone knew about (or suspected) their actions before it came into the public eye. Behaviours such as sexual objectification, trivialising rape, and the denial of widespread rape are huge red flags, and they are behaviours that rapists and people guilty of sex crimes often participate in – as well as being major elements of rape culture, which is why you should always call people out if you witness it. You don’t have to look much further to find more evidence of rape culture, either. Cristiano Ronaldo, who also plays for Manchester United, has faced rape allegations himself from an American woman, and a lot of the general public and football fans aren’t even aware of it. Ronaldo has strongly and consistently denial of all allegations, and the Las Vegas Police concluded that the claims “could not be proven beyond reasonable doubt,” but rape is a notoriously difficult crime to prove and the star athlete is hardly going to simply confess. There are more details to the case that make the whole thing more complex, and while we’ll probably never know if Ronaldo committed the crimes he is accused of, it would not be a first to see somebody with extreme wealth and power get away with a heinous crime.

The reason I mention all this is because a significant chunk of football fans participate in “lad culture,” which is closely related to rape culture in regards to attitudes surrounding women and sex. The NUS report That’s What She Said described contemporary laddism as being “founded upon a trio of drinking, football, and fucking,” and pointed out that links between lad culture and sexual violence have been highlighted by research which found that people “often could not differentiate between the language used by convicted sex offenders and ‘lads’ magazines to describe women,” further suggesting that such magazines functioned to give violent language a “respectable veneer.” Basically, a significant chunk of football fans seem to be trapped in the distant past in terms of their attitudes towards women, and the culture around football supports it. When nobody is calling that behaviour out, it’s very easy for an echo chamber to be created where everyone thinks it’s completely fine.

This is already pretty common knowledge, though. You don’t have to spend much time around certain football fans or on places like Twitter to be witness to blatant sexism. Even beyond rape culture and sexual objectification, misogyny is startlingly common in the world of football (and sports in general, though it seems to be particularly prevalent in football), and the rise of women’s football in the last decade has seen with it a rise in sexist attitudes. A study by Durham University recently discovered what it calls “openly misogynistic masculinities” towards women’s sports regardless of their ages, and again, I’m sure the majority of people reading this don’t need a study to tell them that – it’s incredibly overt a lot of the time and is frustratingly common.

It isn’t just attitudes towards women in football that are in dire need of improvement. As of 2022, there are zero openly gay players in the Premier League (out of over 500 players) and it’s not hard to see why. Football culture is often just as homophobic as it is misogynistic, if not more so. There has only ever been one high profile male player to come out as gay during their career, and that was Justin Fashanu.

Fashanu had a very promising career as a young player, and ended up becoming the first black footballer to command a £1 million transfer fee when he signed for Nottingham Forest in 1981. He came out publicly in 1990, but people often knew about his sexuality at the clubs he played for, and that is what led to his career declining in the early 80s. The Forest manager Brian Clough – who is widely praised as one of the best managers of all time – famously treated Fashanu terribly. Their relationship was poor because of the rumours around Fashanu going to gay bars and clubs, and Clough eventually banned Fashanu from training with the team altogether when he discovered he was gay. In Clough’s autobiography, he recalls a time he told Fashanu off after hearing rumours about his visits to a gay club: “‘Where do you go if you want a loaf of bread?’ I asked him. ‘A baker's, I suppose.’ ‘Where do you go if you want a leg of lamb?’ 'A butcher's.’ ‘So why do you keep going to that bloody poofs' club?’”

One week after Justin Fashanu came out publicly, through an exclusive with The Sun under the headline “£1m Football Star: I AM GAY,” his own brother, John Fashanu, agreed to an exclusive with a different newspaper under the headline “John Fashanu: My Gay Brother is an Outcast.” After he came out, Justin Fashanu faced significant backlash and struggled to find a club for a while despite being fully fit.

In March 1998, Justin Fashanu was playing in America, where a seventeen-year-old claimed to have been sexually assaulted by him. Fashanu fled to England in order to avoid arrest and he killed himself two months later. His suicide note claimed that the sex was consensual, but that he wouldn’t get a fair trial because of his homosexuality (which was illegal in Maryland at the time), and he also said “I do not want to give any more embarrassment to my friends and family.”

Bizarrely, it isn’t just gay men that have been the victim of homophobic abuse in football. Graeme Le Saux – who was a left back for England and was at one point the most expensive defender in English football – faced abuse from fans, the press, and even fellow footballers because of rumours about his sexuality that he attributed to his personality. (He was university educated, did not care for the typical footballer’s lifestyle, and read The Guardian. No, it does not make any sense. Obviously.) In 1999, less than a year after Justin Fashanu’s death, Liverpool visited Stamford Bridge to play Chelsea, Le Saux’s team at the time. Robbie Fowler was the striker for Liverpool, and he repeatedly taunted Le Saux throughout the game, bending over in front of him and pointing his backside at Le Saux. (Yes, an actual grown man in his mid-20s was doing that.) Eventually, when Le Saux was readying to take a free kick, Fowler did it again, and Le Saux stopped taking the free kick to protest, thinking Fowler should be reprimanded for his repeated homophobic taunts, especially when Le Saux had already been the victim of verbal abuse from fans and the press. Mind-bogglingly, Le Saux was then booked for time wasting while Fowler saw no punishment (not even something as little as a verbal warning) from the officials.

The treatment of Le Saux by fans, media outlets, and even other footballers, and the way Justin Fashanu was abused throughout his entire life – especially after he came out – is an incredibly sad reflection of the attitudes towards LGBTQ+ people within football. While it has been over 20 years since Fashanu’s death, the fact that there are zero openly gay professional footballers in England’s top four leagues today is evidence that dire improvement is still needed. It’s still common to hear offensive terms like “rent boy” thrown around in football, too, and attitudes towards women by a lot of fans are no better. Who knows how many people – who would otherwise have enjoyed football as a hobby, either playing or watching – have felt excluded and like they didn’t belong because of the way many fans act?

It would be remiss of me not to mention the rampant racism in the game, too. It still isn’t exactly rare to have fans throwing bananas onto the pitch at black players or shouting racist chants, and Euro 2020 is still fresh enough in everybody’s minds that I’m sure everyone remembers what happened with the players who missed penalties. There have been various campaigns in football to address racism, but it still is not enough. Having high profile players repeat “Say no to racism” in advertisements, or having them wear rainbow laces is not even close to enough. It’s beyond sad at this point. It’s plain embarrassing. The culture needs to change, and it needs to change fast. 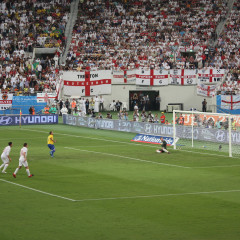 Why is football culture so far behind the times?

Bigotry of various kinds is still rampant in football today, and more needs to be done