Soft-spoken or silenced, fierce fighters or hypersexualised punchlines – we take a look at the representation of East Asian women on camera and beyond it.

Throughout film history, East Asian women have found themselves typecast into roles that minimise their identities to overplayed tropes.

During the 10th Academy Awards in 1937, the Oscar for Best Actress went to Luise Rainer, a white German actress who won the award for her performance as O-Lan in The Good Earth. Rainer stretched her eyes, called it Oriental, and was awarded for her portrayal. This wasn’t an award for Rainer, it was an award for yellowface.

Meanwhile, the first Chinese American film star Anna May Wong looked on. Originally aiming for the role of O-Lan, Wong was instead given a screen test for the villainous role of Lotus in The Good Earth. What could have been a groundbreaking moment in film history, the first Asian American woman to play a leading role as a Chinese character in a Hollywood movie, instead followed a discriminatory status quo.

An industry guideline called the ‘Hays Code’ was in full swing during this time. It dictated what could be shown in films. It banned miscegenation, the relationships between white people and people of colour, which meant a leading white actor (even in yellowface) could not be shown on-screen with Wong.

Wong refused to represent an unsympathetic portrayal of a Chinese character in an all-American cast. She refused to play a part that perpetuated harmful stereotypes of Asian American communities beyond the screen.

Sadly, roles like Lotus are one of many harmful stereotypes Asian women are typecast as in film.

The ‘Lotus Flower’ (also known as the ‘Geisha Girl’) is a stereotype presenting Asian women as dainty, subservient and equates these qualities with smallness. Soft-spoken or silenced, the Lotus Flower is perceived as passive with innocent qualities. In film, she is viewed as a prize, docile and sexually objectified.

In a similar vein, there are the ‘Madame Butterfly’ stereotypes sentencing women to a life revolving around serving male figures. Loosely tied around the plot of Puccini’s opera of the same name, the Butterfly is a doting wife dedicated to her marriage and willing to risk her life to save her lover. Similar renditions of this stereotype include the musical Miss Saigon, a tragic romance about a Vietnamese woman who is abandoned by her lover, an American soldier.

If not tragic, the stereotypes turn red and pull the ‘villain’ card. The ‘Dragon Lady’ is a portrait of a deceitful, unpredictable and seductive East Asian woman. Skilled in violence, think Lucy Liu in Kill Bill or Anna May Wong in Daughter of the Dragon. This stereotype probably wins the award for the most recycled East Asian trope in film and television. If East Asian women are painted as a dragon-lady caricature, they can be perceived as sexually alluring, mysterious and dangerous.

What is dangerous are the consequences these fetishizing stereotypes have on how Asian women are perceived in reality. Many of these stereotypes were not pulled from thin air but can be traced back to the history of sexual imperialism during World War II and the Vietnam War.

On the receiving end of hypersexualized punchlines across film and television are the livelihoods of Asian women who are increasingly becoming headlines in anti-Asian assaults across America, with nearly two-thirds of anti-Asian hate crimes reported by women.

It is important to highlight the realities that exist beyond the camera, which is not so easily captured within scripts. Hollywood plays a part in the perpetuation of harmful East Asian stereotypes, and it is only recently that there have been recognisable changes in on-screen representation.

However, when looking at the history of female Asian representation in film, authenticity still remains a coin toss, especially when we look behind the scenes.

If Hollywood decides not to use yellowface, it will whitewash in its place. Female Asian representation on-screen is always seen as the other, from both casting and character perspectives. In recent years, Hollywood A-Listers like Scarlett Johansson (Ghost in the Shell), Tilda Swinton (Doctor Strange) and Emma Stone (Aloha) have faced backlash for their portrayals of Asian identities on screen.

The lasting effect of which continues to be echoed in the pre-production of films. Box office rom-com hit Crazy Rich Asians was hailed as a groundbreaking moment for Asian representation in cinema with its all-Asian cast. Adapted from Kevin Kwan’s bestselling 2013 novel and starring Constance Wu (as the lead character Rachel Chu), an early producer of the film attempted to make Crazy Rich Asians about a white woman.

Even after release, the stories of Asian American women on screen are still not seen as quite American enough. In 2019, Lulu Wang’s heartwarming The Farewell was nominated in the ‘Best Foreign Film’ category at the 2020 Golden Globes – despite being released first in the US and produced by an American production company.

In an A24 blog post, The Farewell writer/director Lulu Wang wrote: “it is an AMERICAN film, challenging what it means to be American and who gets to claim Americanness”.

The Farewell is a bilingual film exploring immigration, the weight of responsibility and family dynamics. Imagine the outrage if Coppola’s The Godfather trilogy or Scorsese’s The Irishman were nominated in the ‘Best Foreign Film’ category. There is a push and pull when it comes to East Asian representation on-screen, a battle of authenticity and stereotypes in American film history.

Recent portrayals of East Asian women are far more authentic and complex than what they once were. Instead of one-dimensional caricatures rewritten into countless scripts for the sake of comedy or convenience, we find dynamic characters like Billi in The Farewell and Ellie Chu in The Half of It.

The same can also be said behind the camera: Chloe Zhao (Nomadland), Cathy Yan (Dead Pigs, Harley Quinn: Birds of Prey), Alice Wu (The Half of It), Karyn Kusama (Jennifer’s Body), Teresa Hsiao (Nora from Queen’s), and Lulu Wang (The Farewell).

Often behind the scenes tells a story just as well as the final cut, and in the past few years, it seems that we are just beginning to listen to both sides loud and clear. 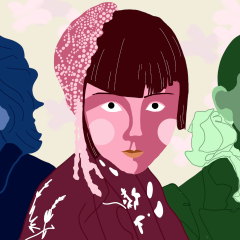 Soft-spoken or silenced, fierce fighters or hypersexualised punchlines – we take a look at the representation of East Asian women on camera and beyond it.