The Department of Education has divulged their intentions not to offer student loans to those who fail GCSE Maths or English. This accompanies other plans to reduce the graduates' income level to repay their loans.

Whilst a global crisis takes centre stage in the news, the government chooses now to discuss new education measures that hit the poor the hardest. Given the current situation, there are few shining light on this issue. However, these new policies and their potential impact are worth discussing.

The first of these new measures, inspired by the 2019 Augar review of higher education, is the decision to create a set of requirements for students to acquire loans. Availability of this loan has undoubtedly aided people from low-income backgrounds to go to university, unable to afford the fees or the cost of living without it. Under new plans, however, students who do not have English or Maths at GCSE, will not be able to receive a student loan.

According to ministers, the reasons behind this are to encourage people into apprenticeships instead of university or restrict entry into degrees that do not offer a solid graduate job.

This has been criticised as impacting the poorest people in this country. Students from low-income families tend to get lower grades in school than those from higher-income backgrounds. Financial difficulties, cultural differences and all manner of factors create this divide. Therefore, these new measures are punishing children for their circumstances. It has nothing to do with their aptitude for university. People also develop at different ages. For example, a student could struggle at GCSE but really thrive during A-Levels when focusing on the subjects that interest them.

The loan is also a massive incentive for working-class people to go to university. Money is an important factor in deciding to go or their parents encouraging them. With obtaining the loan becoming less stable, this could deter perfectly able students from even applying.

Furthermore, restricting entry into ‘lesser degrees’ bolsters an age-old myth for working-class kids: you should only go to university to get a job. All too often, people have said to me, ‘What can you even do with a history degree, be a history teacher?’. That’s not the point. The emphasis of education and university should be to learn, to engage with something that interests you.

This is perfectly fine for students on a higher income, who know through connections or financial resources that they will find a good job eventually. They can apply for these degrees that ‘do not offer a good route to a graduate job’ because there is no fear that in the end, like their parents, they too will one day be a middle/high earner.

However, working-class kids have to consider the financial implications for themselves or their families.

The government is bolstering this myth by cutting off the financial aid for working-class students, which is an attack on their rights to learn.

Also, by restricting entry to working-class people in drama or art, there will be greater inequality in these spheres, losing the valuable working-class voice that needs to be heard! The arts are not a prerogative of the rich, although the government seems to think so with these measures.

The second policy DfE has considered puts working-class students at a disadvantage after graduating. Graduates now have to start repaying their student loan back when they earn £25,000, rather than £27,295. Labour has criticised this claiming it will hit the lowest earners the hardest.

After graduating, you do not go into a highly paid graduate job unless you are incredibly lucky or have connections. People from poorer incomes are unlikely to be connected to people in big businesses or companies, and they are less likely to have these connections and end up in a high earning job.

Lowering the rate it needs to be paid back may deter low-income students from going to university – especially if they feel they have to pay back their debt straight away. It only adds to their financial stresses and worries that already surround going to university in the first place.

In summary, these policies are blind to discontent among students towards tuition fees. During the worst period of the pandemic, students were being charged £9,250 for no in-person contact and support from their universities – hardly what they signed up for. People have called for a lowering of tuition fees, and the very review that these new policies are born from suggests that tuition fees need to be lower for these policies to work.

Instead of acknowledging this, the government targets the people in most need of the loan and sends out a message that they want to make it as difficult as possible for them to access higher education. They are masking this as improving higher education but, in my opinion, are once again making a manoeuvre in the Tory Class war assaulting Britain. 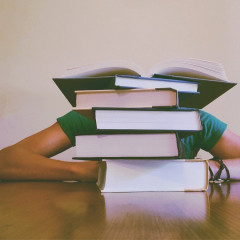 The Department of Education has divulged their intentions not to offer student loans to those who fail GCSE Maths or English. This accompanies other plans to reduce the graduates' income level to repay their loans.