Female inclusion in the film industry is still lacking, but these female-led films and TV shows #BreakTheBias!

In honour of International Women’s Day, I’m breaking the bias of the male gaze by talking about creative work made by women. As I mentioned in my recent article about the feminist interpretations of Jennifer’s Body, The Celluloid Ceiling Report showed that in the top 250 films of 2021, only 17% of directors were women, and similarly, only 17% of screenwriters were women. I want to highlight and celebrate these ground-breaking pieces of work and dive into why exactly women made media is so incredibly important.

Last year, a quote from Margaret Atwood about the ‘male gaze’ went viral:

The quote sparked an intriguing internet conversation regarding how patriarchal male views are so entrenched in our mind, that some women feel like they have to conform to these ‘male fantasies’, often portrayed in film, even when no one is around. In other words, the views of women presented in the media can become internalised and then inform our real-life views of women.

Another more popular test is ‘The Bechdel Test’. This asks whether two named women talk to each other about something other than a man. While these tests proved effective in showing a lack of representation, they didn’t solve the problem of the male gaze. What does fight against this problem: media created by women.

I know personally that I don’t always pay attention to the gender of creators when I watch movies. However, there was only a surprisingly small amount of female-directed shows, especially as I try to make an effort to increase this. I did find, however, that many of my favourite films had been directed or created by women, so I wanted to celebrate how these films have broken the bias.

Jess is the daughter of two traditional Sikh parents living in London, England. But Jess’ dream is to play football, and while her sister prepares for the perfect Indian wedding, Jess sneaks out to train to become skilled as her hero, David Beckham. Director Gurinder Chadha weaves a story about a girl chasing her dream while balancing friends, family, and teenagehood. Even today, stories representing the British Asian minority are sparse, so this creation still seems exceptional. Most scenes portray Jess interacting with the women around her: her mother, sister, and new best friend and explore the differences between her aspirations and those of her family. It has withstood the test of time, and to me, it’s the most iconic sports movie ever made. 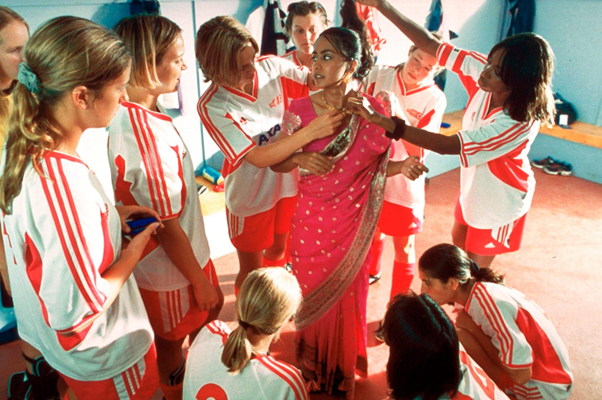 Rocks (Bakray) lives with her mum and younger brother, but when her mum disappears, Rocks has to care for her younger brother. Struggling under pressure, she runs from care workers attempting to take him to a foster home. This empathetic, personal portrayal of the teenage girls in London is real and funny and heartwarming. The acting and chemistry of the young actors is so genuine because the movie was built from a workshop with girls from the local area. Co-star Kosar Ali said about Bakray,

“As soon as we met, we just clicked,” says Ali. “We got kicked out in our first workshop because we were laughing too much, and Bukky goes, ‘Kosar, we ain’t coming back, that’s it…’" The crew consisted of 75% women, and Gavron cast almost exclusively non-professional actors from the local area, and she questioned what was going to hold the story together. "That’s when [co-writer and playwright] Theresa Ikoko, who had also been sitting in on the workshops, said, ‘I’ve got this story, it’s a love letter to my sister and all the young Black and brown women who have to grow up before their time.’”

We Are Lady Parts, created, written and directed by Nida Manzoor, starring Anjana Vasan as Amina (2021)

An all-girl, all-Muslim punk rock band. This is the concept of Nida Manzoor 2021, showcasing a diverse group of Muslim girls who try to gain musical success while dealing with their personal baggage. There is vibrancy and energy to this show that is undeniably infectious, from the hilarious original songs (Bashir With The Good Beard and Voldemort Under My Hijab being my favourites) to the weirdness and individuality of each character.

One thing I found refreshing about the show was how brown and Black characters were presented as diverse and different as they really are. Muslim women are often reduced to an incredibly narrow stereotype in much media, so it’s special to see this show that has obviously been created by someone with intimate knowledge of the intersection identities presented. Although the concept seems wide, the show is mostly about girls growing up, fighting with each other and learning from each other. It’s a show about sisterhood, and even if you’re not into punk, it’s one you’ve got to watch.

Yes, this movie comes up a lot, but there’s a reason why Little Women is so popular. When watching this movie again at Christmas, I was struck by how creative and subtle the structure of the movie is. Director Greta Gerwig quickly weaves back and forth through time, telling both the story of the past and the present. We start with our well-known characters and spend a little time learning about them in this particular reimagining. Gerwig also chooses to focus on Jo’s deep loneliness as a woman, wanting to love and be loved free from the conventions of a patriarchal society. Some characters, notably Amy, are presented in a far more nuanced light than other productions. When we catch up to the present, Gerwig adjusts the ending to shift the lens of the film in a different direction. The special plot linked to what Gerwig believes that the real Louisa May Alcott wanted the ending of her novel to be. As Little Women reflect Alcott's own life, Gerwig believes that she, like Jo, was forced to change the novel's ending from "realising her artistic ambitions" to romance to "satisfy the era's narrative expectations". The film essentially presents two endings: the conventional romantic one and one where Jo’s ambitions are satisfied. 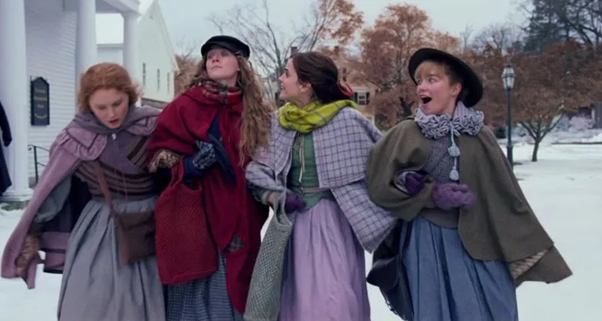 F*ck Anyone Who’s Not A Sea Blob, co-written and starring Hunter Schafer as Jules (2021)

The second special episode of hit show Euphoria, Hunter Schafer entered the writing room to reflect her own experience of gender and sexuality into an episode, a character study of Jules. The episode focuses on Jules’ therapy session and takes a meandering route exploring her relationship with protagonist Rue (Zendaya Coleman) to her changing views on her gender expression. An especially interesting discussion occurs when Jules explores her femininity and womanhood, talking about how femininity has always been her goal, but in reality, it’s impossible to attain.

The Farewell, directed by Lulu Wang, starring Akwafina as Billi (2019)

Lulu Wang’s film opens with the title card: ‘Based on an actual lie.’ The Farewell was based on her grandmother's illness when her family set up a wedding as a pretence for a reunion. It was filmed in the neighbourhood where Wang's grandmother lived, her actual great aunt Lu Hong plays herself in the film. Maybe it's the fact that much of the story is real that makes the film so touching. Or maybe it’s the incredible performances from Akwafina, playing Billi, the granddaughter and Zhao Shuzhen, playing the grandmother. Wang’s doctors predicted that Wang's grandmother or Nai Nai had three months left to live after the stage four lung cancer diagnosis in 2013. When the movie was released in 2019, a caption at the end of the movie read: "Six years after her diagnosis, Nai Nai is still with us." 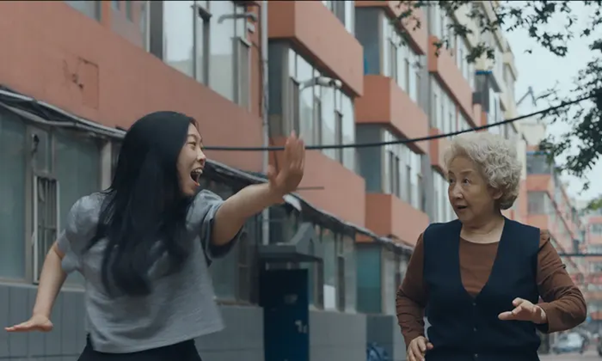 Monsoon Wedding tells the story of an Indian family attempting to balance traditional values and rapidly changing values of a globalised modern India. Marriage, relationships, family, assault, and love, common themes of Indian cinema, are explored but in a family drama instead of the classical Bollywood blockbuster. Following the tradition of a romantic drama set through a wedding, tensions begin to grow, and Mira Nair manages to unearth some difficult topics under the guise of a colourful rom-com. Although set in a secluded privileged household, she comments on issues of class, gender and generational difference. The movie’s ending, where the monsoon rain pours as wedding guests dance around, reminds me of Mamma Mia, incidentally another women-led film directed by Phyllida Lloyd and written by Catherine Johnson.

"Nora Ephron did not invent the romantic comedy, but she did change it in so many different ways," said Erin Carlson, the author of I'll Have What She's Having. Creating films at a time when women-led films were rare, Nora Ephron was somewhat of a pioneer in the creative field. After the success of When Harry Met Sally, which Ephron wrote, she was determined to write and direct her next big movie and even brought in her sister Delia to help with the writing process. She was determined to make the movie she wanted, casting the two main stars herself and her decisiveness made the movie into the classic it is. 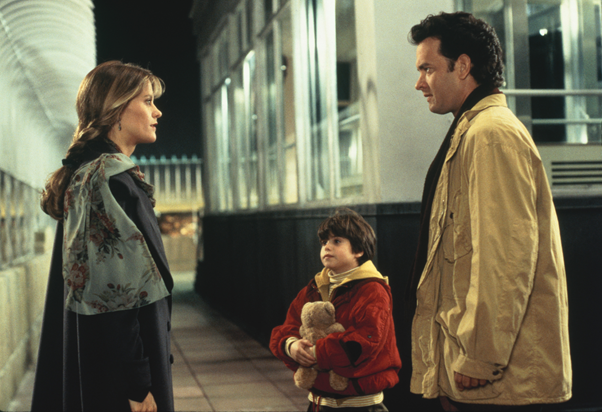 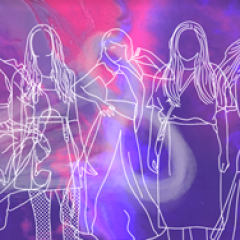 Female inclusion in the film industry is still lacking, but these female-led films and TV shows #BreakTheBias!