For LGBT History Month, we take a look at Karl Heinrich Ulrichs, the first openly gay man in world history.

Karl Heinrich Ulrichs, born 28 August 1825, was a lawyer, jurist, journalist, and prolific writer, but he is most known today as being the first openly gay man in world history.

Born in the Kingdom of Hanover (present-day Germany), Ulrichs claimed he knew he was different from a young age because of his attraction to the bright colours of military uniforms and women’s clothing. He earned a degree in law and theology from the University of Göttingen in 1846, and worked as an official administrative lawyer between 1849 and 1857. A job from which he was eventually dismissed when people learned of his homosexuality. A few years later, Ulrichs openly came out to his friends and family as an Urning, a word he coined considering “homosexual” did not yet exist as a term. He then wrote five essays – collected as Studies on the Riddle of Male-Male Love – under the pseudonym Numa Numantiuswhere he explained homosexuality as natural and biological.

Ulrichs later wrote a statement of legal and moral support for a man who was arrested for homosexual offences. Subsequently, they began publishing his essays and theories under his real name, possibly making him the first gay man ever to “come out” in the modern sense of the term. August 29 1967, marked a momentous occasion for Ulrichs, as it was the day he became the first gay man to publicly speak out against homophobia (though it wasn’t yet labelled that). He called for the repeal of anti-homosexual laws at the Congress of German Jurists. He stood before over 500 lawyers and officials in Munich, and despite spectators crying out for him to stop or be crucified, he continued his speech until he was forced off the stage.

Ulrichs was, unfortunately, unable to witness real positive change for LGBTQ+ people in his lifetime in the form of legislature or general public attitude towards gay men. He did, however, give hope to those that read and related to his work. His essays were cited in Krafft-Ebing’s Psychopathia Sexualis in 1886, and in later editions, Krafft-Ebing published letters from men who had read Karl Heinrich Ulrichs work in their book.

One man claimed he had discovered Ulrichs’ writing when he was 30. He said,

“I cannot describe what a salvation it was for me to learn that there are many other men who are sexually constituted the way I am, and that my sexual feeling was not an aberration but rather a sexual orientation determined by nature… I no longer attempted to fight this orientation, and since I have given my Urning nature freer reign, I have become happier, healthier, and more productive.”

There are several more letters of a similar nature, and there would no doubt have been countless more men that felt empowered and accepted by Ulrichs’ work that did not or could not send similar letters.

Karl Heinrich Ulrichs’ legacy lives on today. His remarks helped inspire the rise of the world’s first gay rights movement, and today there are streets named for him in Munich, Bremen, Hanover, and Berlin. Anyone can be enormously inspired by Ulrichs and his ability to be himself unashamedly, and his resilience in the face of adversity is beyond admirable. Late in his life, he wrote,

“Until my dying day, I will look back with pride that I found the courage to come face to face in battle against the spectre which for time immemorial has been injecting poison into me and into men of my nature. Many have been driven to suicide because all their happiness in life was tainted. Indeed, I am proud that I found the courage to deal the initial blow to the hydra of public contempt.” 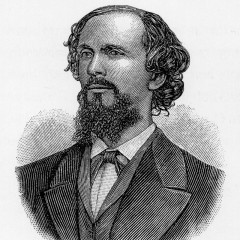 For LGBT History Month, we take a look at Karl Heinrich Ulrichs, the first openly gay man in world history.