Often thought of as wild, uncontained, and a master flouter of all French societal rules — the 17th-century story of Julie D’Aubigny, is generally thought more of as myth than fact.

The fact is Julie D’Aubigny, better known as Mademoiselle Maupin or La Maupin, did exist. Whilst historians debate the details, even as far as her name, one thing is for certain: her turbulent career shifts (relatable), boisterous affairs with both men and women, and finally, her certified status as an all-round rebellious icon.

Receiving one of the finest French educations, Julie was taught alongside men. It was in these early days where she trained in swordsmanship on request and tutelage of her father, Gaston D’Aubigny — the man responsible with the training of King Louis XIV’s pages.

She was taught to defend herself mentally and physically in a society that framed itself on rigid gender structures.

Often Julie would go beyond these parameters, dressing herself in men’s clothing out of choice and practicality. The extent of which led people to mistake her as male. Julie excelled in swordsmanship, and her ability went beyond her peers.

At age 14/15, Julie began an affair with her dad’s boss, the Count d’Armagnac. To conceal their relationship, Count d’Armagnac arranged for Julie to marry a man called Sieur de Maupin. A marriage lasting for a fraction of time, Sieur was posted elsewhere in the country, and Julie remained in Paris.

Soon after, Julie was romantically entangled with a fencing instructor named Sérannes. After accusations that Sérannes was involved in a duel leading to the death of another man, the two dramatically fled Paris.

To make a living, Julie picked up both sword and song. Like true extroverts, the couple engaged in public duelling exhibitions and drew attention to themselves by singing tales in a string of inns.

Criminally in love with a lady

After growing increasingly bored of Sérannes (and just men in general, though with her history, who can blame her), Julie dropped him and set her sights on a beautiful woman who shared the same feelings.

Of course, the young woman’s parents did not share the same sentiments about their relationship. Without haste, they sent Julie’s girlfriend to a nunnery to keep these star-crossed lovers apart.

Julie followed her forbidden love to the convent and hitched a masterful break-out plan to reunite finally.

She decided to steal a nun’s dead body, place it in her lover’s bed, and then set the room on fire. The two fled in chaos in the background of a blazing nunnery.

Sadly, this unconventional love story did not have a happy ending. Julie ditched her girlfriend after three months, and her lover retraced her steps back to her family.

To no one’s surprise, Julie was charged with crimes including, but not limited to: arson, kidnapping, dead body snatching and failing to show up at trial. As a result, she was sentenced to death by fire. In the documentation, Julie is interestingly referred to as ‘Sieur’ (a formal term of address for a man) to cover up the homosexual nature of the relationship.

If Julie says she wants to go back to Paris — she means it.

In an attempt to low-key return to Paris: Julie was tutored by an ageing talent called Maréchal, who believed she was destined for the stage. After a public disagreement, she successfully duelled three squires at once and won, then briefly began a relationship with one of the men she kebab-skewer-stabbed in said duel, and then found a brand new lover in fellow singer Gabriel-Vincent Thevenard.

Now a woman on the run, she reconnected with her father’s boss (and former lover), Count d’Armagnac, to ask for the King’s pardon. In all of this, the King basically said, ‘lol that’s funny, okay xoxo’ and annulled the death sentence.

At 20 years old (yes, this all happened by the age of 20), the newly freed Julie D’Aubigny joined the Opera. Audiences fell under her charismatic charm, where she starred as: the goddess Minerva, queen Medea, and warrior Clorinda.

Following the spirit of her on-stage characters, she would often spar and duel with male singers who placed their egos higher than their morals. Often, Julie stood up for the chorus girls who would otherwise be taken advantage of by opportunistic noblemen.

The turmoil of love followed her onto the stage, where she fell for soprano Marthe le Rochois and Fanchon Moreau, who failed to return her feelings.

Scandal was her second shadow. Rumours spread far and wide of how she was once kicked out of King Louis XIV’s ball for openly courting and passionately kissing a woman in the middle of the dance floor. If Julie hadn’t defied death enough, she challenged three of the woman’s suitors to a duel and defeated them all in the King's back garden.

Beyond this, her later suitors ranged from a German prince to reuniting with her first husband until his death.

Every stride is a statement. The turbulent story of history’s bisexual baddie Julie D’Aubigny is one of sexual liberation, gender exploration, and pride.

Of course, aligning Julie’s flamboyant story with the questionable track record of history’s depiction of women, she is relatively unheard of. Her story is documented through sources that predate gossip-mongering tabloids, which means there are several versions of events. All of them steeped in scandal, no less. 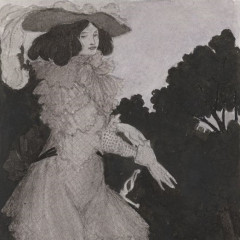 Often thought of as wild, uncontained, and a master flouter of all French societal rules — the 17th-century story of Julie D’Aubigny, is generally thought more of as myth than fact.