February is LGBTQ+ History Month, a time to celebrate individuality, love and acceptance alongside helping to improve the lives of those in the LGBTQ+ community.

Elton John is one of the world's biggest musical icons. Smash hits like Crocodile Rock, I'm Still Standing, and Rocketman catapulted him into superstardom.  A musical biopic, also called Rocketman, about his life, was released in 2019 and went on to be a box office hit. Many will know that Elton is also openly gay and has campaigned tirelessly for the rights of gay people all over the world – as well as trying to help find a cure and fight stigma for HIV through his AIDS Foundation.

In his 50-year career, Elton has been vocal about his sexuality and strives to improve the lives of others who are battling against stigma and feelings of shame. However, it wasn't always this way as officially, he didn’t come out as gay until 1992 in an interview with Rolling Stones. Before this, Elton was due to marry his first girlfriend, however, the wedding was called off.  The track Someone Saved My Life Tonight, written by Elton’s long-time friend and songwriter Bernie Taupin, was about how Elton felt trapped in his heterosexual relationship as friends convinced him not to go through with the wedding.

Before coming out as gay in 1992, Elton believed he was bisexual and would tell of his pride around his bisexuality and why he thought it was ok to love either gender. He went on to marry a woman named Renate Blauel, of whom he was married for four years before another landmark interview in the Rolling Stone where the singer revealed that he was gay.

After various relationships and breakdowns in his personal life, Elton met filmmaker David Furnish, his now-husband with two kids. The pair married in 2005 as part of a civil ceremony. In 2014, they became one of the first legally married gay couples after groundbreaking changes to the law.

Elton set up the Elton John AIDS Foundation in 1992 after a close friend passed away from the disease. The foundation aims to create a world free from AIDS whilst giving people the support and education they need to help understand the condition further, reduce stigma and eventually find a cure. The foundation has gone on to fund palliative care for those in Africa whilst Elton himself spoke to the US congress around more funding for AIDS prevention and continues to this day to support LGBTQ + people around the world. 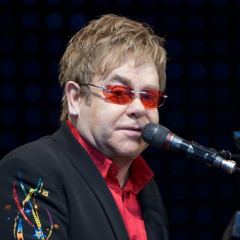