Edinburgh Fringe Festival makes its triumphant return this year to celebrate it’s seventy-fifth anniversary. 3,000+ acts are performing though which makes it easy to be inundated, so here are my top picks as a Fringe newbie to check out.

Edinburgh Fringe Festival is celebrating its seventy-fifth anniversary this year from 5 - 29 August. The Fringe is literally the world’s largest arts and culture festival and as we wait for it with baited breath, what better way to build our anticipation for it than to look ahead to some acts which we are anticipating?

I must admit however that I do have a confession to make before we proceed any further into the article. Ordinarily, the genre of music which is on offer at the festival is not something I would usually listen to; Hip-Hop, UK Rap and R&B are the three genres which had all dominated my Spotify Wrapped of 2021. In my home, you are far more likely to hear the energetic sounds of Bhangra than Bonnie Bayou's Blues. These are three acts which I have checked out that are all scheduled to perform at this year’s festival, from an outsider’s uninitiated, unadulterated perspective standing on the ‘fringe’ of the music offered at The Fringe.

Adam Holmes is a singer/songwriter whose music is best categorized as something known as ‘roots’. Now, roots music is interesting because it actually encompasses a number of different musical genres; blues, country and gospel for instance are just three genres which fall under the category of roots music. Holmes is best known for his amalgamation of traditional and contemporary folk with soul and Americana.

My initiation to his music was his live performance of 'Oh My God' at Solar Festival - Edinburgh in 2014. Oh My God laments mortality, and the fact one will inevitably pass away when we are older, ready or not. Holmes explores reading newspaper headlines and how young men were sent into the trenches in WWI, reflecting on this grave reality in the chorus when he declares that one may die when “... I’m not ready”. Admittedly, it’s a heavy topic but one the artist croons about in a way that almost makes you forget this. Holmes’ melodic stringing of his guitar accompanied by his deep and soulful vocals are enchanting, which make for an interesting contrast to the morbid subject matter that serves as the muse for the song. Holmes is a multi-hyphenate and he masterfully combines his instrumentation and vocalisation, conjuring images of a soldier in the trenches singing ballads with his comrades as bombs rain overhead. One cannot help but be comforted in an off way, like sitting besides the fire as it pours with rain outside.

Oh My God is not necessarily the first song that I would put on when a friend passes me the AUX. However, it is one of the first songs I would put on in the sort of scenario which I have detailed above; Oh My God is the perfect soundtrack for the melancholy days when you are taking shelter from the rain (preferably accompanied by a stiff whiskey). Holmes’ offers an accessible entry into roots music and offers an interesting, acoustic and soulful parallel to genres which I am more familiar with, such as R&B – I am looking forward to his performance at The Fringe.

Ali Affleck is the front-woman and vocalist for a jazz band that goes by the moniker, ‘Ali Affleck and Pals’. The band masterfully utilised to maximum effect the melodic and serenading vocalisations of Affleck, accompanied by piano, trumpet, drums and double-bass cello for a truly ‘big band’ feel with fewer people – an impressive feat indeed.

My intro to them was their performance of 'I Get The Blues When It Rains' at The Jazz Bar, Edinburgh. Affleck’s rendition is actually a cover of the legendary Jim Reeves, and like Reeves, Affleck uses a vector of pathetic fallacy to explore one of the oldest themes in music – love. She serenades the crowd with reminiscences of a lost love which she is reminded of by gloomy weather, something which is an all too familiar pain that anybody who has been in love before can relate to. Affleck’s vocals are soothing and the crescendo of all instruments behind her are almost empowering, she is clearly not in pain anymore as she recollects and regrets all of the “... tears I’ve shed in vain”. Indeed, this is less of a break-up song and is more of a song that reminds you of what once had been. The song will whisk you away to the exact sort of jazz club that you would expect to find in Louisiana, one can almost smell the tobacco and the rum.

Affleck and Pals’ I Get The Blues When It Rains is the perfect song to set a relaxed yet playful vibe. Whether you listen to it at home with a drink or you just happen to hear it playing at the local Cosy Club, it is a charming cover of the original and its beautiful melodies and ‘big band’ feel will no doubt lull you in. Jazz is a genre which I have always had an appreciation for but could honestly never properly get into, Affleck and Pals’ may just be the act to change that and I am looking forward to seeing their so-called ‘Speakeasy Sessions Live From LA’ at The Fringe.

The first song that I heard from the group was their performance of 'Do I Move You' at The Fringe, 2017. Similarly to Ali Affleck, Smit is actually covering a song which was originally performed by Nina Simone. The perennial subject of love is tackled once again, but this time from much more … sensual, angle. Smit’s stage presence is undeniable and her charisma oozes through her performance of the piece, flirting with the five piece band’s instrumentation as she asks one simple question – “do I move you?”. The reason that I chose to highlight this act is because of the overall tempo of their performance here. Whilst Affleck’s performance was boisterous, energetic and it encapsulates the ‘swing’ element of jazz, Smit’s performance in comparison is much more sensual, slow and a different vibe entirely. This gives you time to take in every single pluck of the bass guitar and every crash of the drum cymbals, which is perfect for the uninitiated like myself who may struggle to keep up with quicker performances. The dichotomy between the two acts serves as the perfect albeit rudimentary introduction to jazz music, showcasing how dynamic the genre is and what one can expect to look forward to when you see them at The Fringe.

Smit & Co will be performing at this year’s festival with a set that has been titled, ‘Queens Of The Blues’. This is an ode to the women who have defined the genres of blues and pop over the last century, featuring a carefully curated list of songs that the band will cover and no doubt add their own flavour to. Smit’s music alone is reason enough to see her but the dynamism that she adds to her performance  makes her and the Blueswater a must-see act at this year’s Fringe. 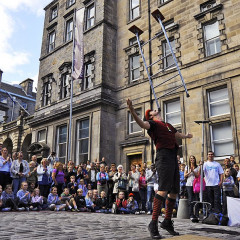 Edinburgh Fringe Festival makes its triumphant return this year to celebrate it’s seventy-fifth anniversary. 3,000+ acts are performing though which makes it easy to be inundated, so here are my top picks as a Fringe newbie to check out.