Our top picks of the week for your listening pleasure

Sea Girls have taken the music scene by storm. Their debut album Open Up Your Head debuted at number three on the UK album charts, since going on to sell out venues all across the country. Taken from their upcoming second album titled Homesick, Lonely is a simple but just as anthemic new tune that expresses the longingness for someone you just can't hold. The track opens with an acoustic guitar and a whistle-like tune, progressing into a confident verse as Henry's recognisable vocal builds upon their signature sing-along chorus that recites “I get a little bit lonely, when I'm not with you”. Lonely is the perfect indie anthem for any night out and sees a huge return for the London four piece.

Bright and breezy, Feel It Again is the remedy you need to combat the ever-changing dark times we are living in. Hailing from America, Landon has constructed a blissful acoustic tune that celebrates the good times and friendships of the past and hopes for the future, pulling influences from southern-folk. The track itself feels fresh and exciting, featuring simple guitar melodies and angelic backing vocals alongside Landon’s reassuring, velvety smooth performance. If you're dreaming of warm summer nights, Feel It Again will take you there in an instant.

With an enormous yet thrilling change of direction Sundara Karma returned with their pop punk inspired new single Oblivion!. Changing up their sound is nothing new for the band, and is indeed where they thrive in the modern scene. Even so, Oblivion! feels like the band's most unexpected twist yet. Leaning into the American rock scene, Oblivion! has early 00’s guitar riffs and energised drum beats that transports the listener through a journey of heartbreak, with lead singer Oscar Pollack detailing “For me ‘Oblivion!’ is about the aftermath of a deeply intense relationship, there can be a lot of loose ends and debris. The rug gets pulled out from under your feet and in many ways it feels like your reality shatters”.

Straight from Ireland’s thriving indie music scene, modernlove are a quartet that pack an almighty punch, and new single Follow You is crafted out of catchy hooks and lyrics that grabs your attention from the word go, with a chorus that's begging for a festival crowd. Talking about the track the band explain “'Follow You' is a love song about the early stages of infatuation in a relationship. It's about finding yourself in a relationship so intimate that spending each waking moment together still isn't enough, hence the lyrics "when you fall asleep I'll follow you"”. Follow You holds so much confidence and flare despite it being released so early in their career, predicting a trajectory that's only going to grow.

Beija Flo - Waiting for the Sun

Beija Flo has released her stunningly haunting new single titled Waiting for the Sun. Vocally the new tune is nothing short of sublime, Beija’s voice is soft and almost jazz like at the start accompanied by mellow, soothing piano, transforming into a feisty rock driven ballad backed by razor sharp drumming and unmissable electric guitar sequences. Talking about the track Beija explains “Ifind it hard to describe what 'Waiting For The Sun' is - not because I don't know what it's about, but because it's emotionally challenging to talk about. It feels like such a milestone in my life to finally be releasing it”. If you’re a fan of Celeste or Wolf Alice this track is an absolute must hear. 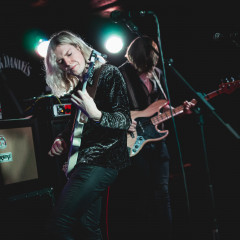 Our top picks of the week for your listening pleasure