We take a look at the long and arduous path to legal equality undertaken by the LGBTQ+ community.

The LGBTQ+’s path to attaining legal equality has been both long and arduous within the UK.  Northern Ireland only legalised same-sex marriages as recently as two years ago in 2020! We will explore the path to legal equality by looking back at some of the milestone pieces of legislation.

The Sexual Offences Act (1967) had decriminalised homosexuality across both England and Wales. Scotland and Northern Ireland were later adopters of this legislation, however, and they only did so in 1981 and 1982, with the latter only decriminalising following a court case by a man called Jeff Dudgeon.

The European Court Of Human Rights heard Dudgeon’s case to decriminalise homosexuality in 1981 after he argued that it amounted to a contravention of Article 8 for the European Convention On Human Rights (ECHR).

The European Court Of Justice in 1996 had ruled in the case of ‘P v S and Cornwall County Council’, that P was unfairly discriminated against and dismissed from their job after informing their employer they would be undergoing gender reassignment surgery.

The court ruled they would otherwise not have been let off and established a precedent throughout the UK.

In ‘Sutherland v United Kingdom’, The European Commission Of Human Rights would rule that the ECHR (Articles 8 and 14) were violated because there existed neither an objective or reasonable justification for having a higher age of consent for male homosexual partners.

This was in 1997, but the age of consent was unfortunately not lowered until three years later in 2000.

The EU Employment Equality Framework Directive (2000) had offered protection in the workplace, protecting from discrimination on the basis of sexual orientation and this would take three years to pass. The European council ruled in 2000, but it did not become law until 2003.

The European Court Of Human Rights (2002) ruled in the case of ‘Christine Godwin and I v The UK’, that the government violated the plaintiff’s human rights as they could not change registered gender. This ruling covered employment, pensions and social security after a number of failed previous attempts, and was passed in 2004.

This was bolstered by another case named ‘K.B v NHS Pensions Agency’ after a preliminary ruling by The European Court Of Justice (2004). The Court ruled it was wrong for the healthcare service to refuse KB’s transexual partner a widower’s pension, recognising transgender rights in this landmark case.

The UK would formally consider and subsequently ratify The Civil Partnership Act (2004) in 2005 - Scotland allowed Westminster to negotiate on their behalf so whatever they ruled also applied to them. However, due to legal and social objections, the term ‘marriage’ was reserved for heterosexual relations; same-sex relations were instead a ‘civil partnership’.

This gave same-sex couples the same legal status, rights and responsibilities as marriage would have granted. This meant that same-sex couples would now enjoy official and public recognition of their relationships, although without the religious support for it.

England, Scotland and Wales allow civil partnership ceremonies to take place on religious premises - Northern Ireland however does not.

Later, the legislation would be passed that allowed heterosexual couples to also have a civil partnership instead of a marriage.

The Equality Act (2010) protected nine characteristics, and it notably would include sexual orientation. This placed responsibility on public authorities to safeguard these characteristics and take active steps to do so.

The Marriage Act (2013) enabled same-sex couples to get married rather than enter civil partnerships. Any couples who were already in a pre-existing civil partnership could convert these into a marriage should they desire.

The act though was passed on different dates throughout the union due to a myriad of factors, they are; England in 2014, Scotland in 2014 and Northern Ireland in 2020. 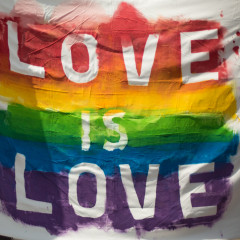 LGBTQ+ History Month : The path to legal equality in the UK

We take a look at the long and arduous path to legal equality undertaken by the LGBTQ+ community.