To celebrate LGBTQ+ History Month, we take a look at the first LGBTQ+ MP - Mareen Colquhoun.

As of 2 February 2022, 59 MPs currently identify as LGBTQ+. Parliament has been a centre of power for over nine-hundred years however it was only in 1976 (just forty-six years ago), that an individual openly came out and identified as being LGBTQ+. Mareen Colquhoun was Labour MP for Northampton North and she was the very first openly lesbian MP. So, who exactly was she and what was her story?

Colquhoun tried (and unfortunately failed) to contest the seat for the constituency of Tonbridge in 1970. Afterwards, she acted as a councillor for the constituency of Shoreham-By-Sea between 1971 to 1974; Colquhoun was the only female councillor there and she faced great adversity from the Conservatives. For example, there was a decision to block her from being appointed in roles at schools and libraries – which was eventually overruled – because Conservative opponents said she ‘talked too much’. Undeterred, Colquhoun would run again and she was successfully elected as the MP for Northampton North in 1974.

In 1973, Colquhoun decided to leave her husband of twenty-five years, with whom she had three children. She left her husband and came out as openly lesbian when she announced her relationship with Barbara ‘Babs’ Todd.

The constituency that elected her however deselected her with a ratio of twenty-three votes to eighteen, with one abstention. The committee that deselected her did it on the basis of her sexuality and feminism, citing her “obsession with trivialities such as women's rights” which ‘undermined’ why she was elected. Colquhoun rightfully insisted that these issues had nothing to do with her ability to perform as MP.

Although this was later overturned, there was too much damage done for the two parties to reconcile. In 1979, she lost her seat to the Conservatives.

While in Parliament, she advocated for a number of what were truly progressive policies at the time.

Colquhoun was an early campaigner for female rights and argued for creche facilitates for female MPs. In 1975, at Labour’s party conference she argued; “it is outrageous that we have to ask for this. The Labour Party pays mere lip service to International Women's Day… Young women are deterred from coming because there is no provision for their babies. Those who do are not even allowed to bring their toddlers into the gallery”.

Parliament now offers nursery facilities, no doubt due to the efforts first initiated by Colquhoun. However, there is still work to be done, as illustrated by MPs like Stella Creasy, whose baby was banned from Parliament.

In 1975 Colquhoun introduced The Balance Of Sexes Bill for greater equalities throughout public bodies. The bill’s objective was to necessitate that men and women be appointed in equal numbers in these institutions; 4,500 jobs and 174 public bodies were identified as being almost entirely male in their composition.

Whilst there were amendments made to the nominations list that candidates had been selected from, she expressed doubt that it went far enough and unfortunately her ability to expand it further was curbed as the bill did not formally become ratified as law.

Colquhoun along with nine other members of the party had all collectively penned a letter to The Times, advocating for an “alternative policy” and the removal of troops that were stationed in Northern Ireland. This was undermined when she, unfortunately, expressed support for the racist and fascist, Enoch Powell. Although she later publicly said she regretted her comments and withdrew her support for his opinions, this remains a black mark on her otherwise progressive efforts.

The Protection Of Prostitutes Bill (1979)

Colquhoun (and fifty prostitutes) successfully campaigned for decriminalisation of prostitution through The Protection Of Prostitutes Bill (1979).

In 1979 she lost her seat but still remained in and around politics and even published an autobiography. Colquhoun died exactly one year ago from the time that this article was written on 2 February 2021, at ninety-two years of age. 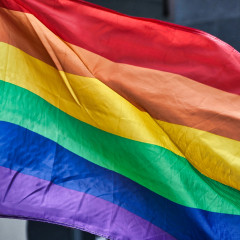 To celebrate LGBTQ+ History Month, we take a look at the first LGBTQ+ MP - Mareen Colquhoun.