Much beloved by millions around the world, The Muppets Christmas Carol is the perfect Christmas movie, so join us as we rank its songs from worst to best.

The best thing about The Muppets Christmas Carol is the songs. Actually it's Gonzo and Rizzo's top notch narration, but the songs are a close second. With so much love and care put into this film, the songs allow the filmmakers to showcase the greatest aspects of the Muppets, wackiness, wit, and creativity. But how balanced are the songs? What separates the bops from the flops? Here's Voice's official ranking of all the songs from The Muppets Christmas Carol from worst to best.

First, some ground rules. The official soundtrack contains several songs that don't appear in the film. These will be ranked alongside all the other songs, but since they only really exist in a vacuum, they're going to be at a disadvantage. Next thing to establish is the list won't include instrumental pieces. The instrumentals are fantastic and do a lot for the atmosphere but this list will only focus on songs with lyrics, deciding which instrumental pieces to include would be too ambiguous.

With all that established, let's begin the ranking:

The first of three songs on this list that weren't included in the actual movie, 'Chairman of the Board' is an utter trash heap of a song. We should all be thankful it was cut. It's narratively pointless, dull, and for some weird reason the lyrics only rarely match up with the beat. I doubt it was given much thought or redrafting since the filmmakers weren't sure it would be included, so it doesn't at all reflect badly on them. But still, my poor ears. Easy last place.

'Room In Your Heart' is another one that doesn't show up in the actual film. There's a decent jump in quality between this and number 11, but it still has the same issue as being a bit purposeless in the story. It comes after Scrooge refuses to give money to a charity, and the one asking for the donation sings about how there's room in his heart for love. Doesn't mesh with the overall message of act one, i.e. Scrooge is an unforgivable miser and any attempt to change that is stamped out immediately, but it's pretty fun.

'The Love We Found' is a pleasant enough note to leave our characters on, but it's short and a bit uninteresting. It's the only song on the list that feels like a placeholder, as if they just needed a few nice sounding words to pan out to, and the only one included in the film that feels truly forgettable.

I remember often thinking during the final young Scrooge and Belle scene that they were gearing up for an emotional lament, I even Mandela affected myself once, saying it was my least favourite song in the film even though it never happens in the actual movie. There was a certain amount of vindication then, when I discovered they had not only recorded, but filmed a song for that exact moment. 'When Love Is Gone' is not my least favourite, but it's certainly nothing to write home about. It feels out of place as this somber number straight out of a Victorian romance, with not a puppet character in sight. It does flesh out the Scrooge/Belle relationship, and it's quite emotional when modern old Scrooge begins to duet with her, but . The most interesting thing about it is the shared melody between the lyrics, "when love is gone" and "the love we found". That definitely implies the latter was intended to hearken back to the former, probably showing that the love Scrooge lost with Belle has returned with the love he now shares with everyone he meets. Sweet stuff. Meh song.

A lovely demonstration of a reformed Scrooge, with an uplifting melody and merry lyrics. It's a bit repetitive with the recurring call and response, but on paper, this is an entirely pleasant song that fits perfectly with the story beat it coincides with. But then there's Michael Caine's singing voice. Put it like this: Michael Caine is a superb actor, and he should be proud of that. When it comes to singing… well like I said, he's a good actor. That being said, this is the first song on the list I'd call unequivocally 'good', and from here on out it's nothing but gems.

I have a lot nerve placing a random, thirty-second scat session that exclusively consists of rehashed lyrics but god dammit, Bob Cratchit (played by Kermit) carrying his son Tiny Tim on his shoulder and the two of them just musically vibing together is so goshdarn heartwarming I refuse to place it any lower. It's catchy, immediately captures how close they are, and is filled with so much warmth it's almost impossible not to smile during it.

5 - One More Sleep 'Til Christmas

This song serves as a sort of 'circuit breaker' for the dreary tone of the first act. Once Scrooge is out the door, the film is free to rev up some of the heartfelt cheer that the Muppets are so often known for. With some classic Christmas-sounding instrumentals playing in the background and Kermit Cratchit's whimsical vocal performance this song is a pleasant experience that lulls somewhat in the middle when it focuses on the shenanigans of the bookkeepers and the ice-skating penguins. Whilst this makes listening to it on its own a little less enjoyable, watching it in its context helps to give texture to the city of London during Christmastime, giving us our first glimpse into a world outside of Scrooge.

I was sorely tempted to throw this up as a number, it was my jam growing up. But in the interest of not giving in to nostalgia, its issues need to be addressed. Primary amongst them is the fact that a lot of the song is sacrificed for the sake of the narrative, with a considerable amount of dialogue interspersed breaking the flow of the song. It's also fairly short — barely more than a minute and a half long without the speaking parts — which exacerbates the dialogue problem. All that in mind, this song still slaps. Doubling the number of Marleys in order to cast Statler and Waldorf as the brothers Marley was a masterstroke. That decision alone justifies the need for Muppets version of A Christmas Carol. Their classic heckles work to comedify the iconic ghostly warning, but they don't turn the scene into a joke. Some of the lyrics in 'Marley and Marley' are as raw as they come, even capturing Dickens' original message with "as freedom comes from giving love, so prison comes with hate." This song is the best example of adaptation in the entire film — not changing the original material, but enhancing it with a new direction.

Tiny Tim, always the heart of any A Christmas Carol adaptation, delivers the soulful peak of The Muppets Christmas Carol. The way the music and camera travels between the Crathchit family is perfectly in line with the quiet, heartfelt appeal to love one another that makes up the core of the song's lyrics. It fits nicely into its place in the narrative. The slow pace and ruminative lyrics slow the story down after the hustle and bustle of the Ghost of Christmas Present. Scrooge witnessing a family with no means or riches sing about how fortunate they are to have each other impacts him deeply, as well it should. To sum it up as a single sound, it's like a contented, hopeful, sigh.

What an opening. Bombastic, grim, delightful in how much it revels in disparaging the deviousness of its own protagonist, Scrooge fully embraces the gothic elements of its source material, adding an intoxicating over dramatic flair. The way the townsfolk all unite to badmouth Scrooge with their over-the-top disses build him up as this despicable entity, its glorious. This is also the most 'Muppets' song in the film. Tons of wacky moments and creative puppetry embolden the lyrics. If anyone begins the film unsure of its premise, Scrooge will never fail to convert them.

There's a reason this song plays twice during the film. After it comes during the Ghost of Christmas Present's section, it had to come back for the end credits. As much as 'Bless Us All' is a quiet contemplation of a love and family, 'It Feels Like Christmas' is a loud, triumphant display of absolute joy. The Ghost of Christmas Present is such a beacon of cheerfulness and empathy, his song is therefore a reflection of childlike wonder and appreciation for every small detail of Christmas, and on a wider scale, happiness itself. The music swells as the chorus comes back time and time again, each instance capturing a thousand thoughts and senses, hopes and dreams. There was stiff competition, but this was the obvious choice for number one.

We hope you enjoyed the ranking. Let us know if you agreed, disagreed, got halfway through before thinking "no way is 'Chairman of the Board' not number one, this blows". This film is such a delight, and whichever songs are your favourites, we wish you all the best for the festive season. 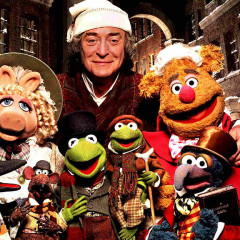 Much beloved by millions around the world, The Muppets Christmas Carol is the perfect Christmas movie, so join us as we rank its songs from worst to best.