Continuing on our Christmas retrospects comes one of the few video games set during the festive season, Batman: Arkham Origins.

Cards on the table, this is my least favourite game in the Arkham series. But it's also the only one to be set during Christmas so, hey I guess my hands are tied. I do want to talk about it though because as much as I was disappointed by it, I think Batman: Arkham Origins gets a bad rap.

The third installment of the Arkham series had quite a lot of obstacles to overcome. First of all it was the only one not to be produced by Rocksteady, who absolutely knocked it out of the park with the first two games, and WB Montreal didn't really have the experience at the time to make their contribution a sure-fire win. This was also the first in the series not to have Kevin Conroy and Mark Hamill voicing Batman and the Joker respectively. Roger Craig Smith stepped up to the plate well enough, and Troy Baker does an excellent Joker, but combined with the less gritty aesthetic, this change in cast really compounded the feeling that this wasn't a 'real' Arkham game.

It had a superb premise going into it. Set long before the events of the previous game during the early days of Batman, the caped crusader has infuriated enough of the bad guys to incite a $50 million bounty being placed on his head, giving every thug in Gotham "one night to kill the bat". Assassins come crawling out from every nook and cranny in the criminal underworld to claim the prize.

Being set on Christmas Eve actually has a surprising amount of impact on the game, particularly on its atmosphere. The constant snow, the Santa-hat wearing goons, the various lines of dialogue from the random thugs about how they should have been given the day off, it all gives the story a definite place in time. The decorations lining the street have the biggest influence on the aesthetic. It creates this pretty fun juxtaposition between the brooding Dark Knight and the Christmas trees the caped crusader hangs off of. Even the music leans into the Christmas vibes, with the Joker's theme becoming a twisted version of 'Carol of the bells'.

Something I remember vividly is Alfred constantly asking Batman to come home for Christmas dinner. This might sound strange, but this alone gave the game a sense of urgency. I don't know why but the idea of Alfred sitting alone on Christmas day half-heartedly picking at bits of roast turkey really made me want to win as quickly as possible, like 'come on Bruce, let's wrap this up'.

The urgency doesn't just come from this though. The boss battles really amp up in this installment. The other games had their highlights but I'll go on the record and say I think the most consistently good boss battles in the franchise come from Origins. Deathstroke and Firefly are the best examples of this. Multi-phase fights that introduce new mechanics that grow in complexity as they go on? Now that's how you create tension.

But, as I said, this is my least favourite in the series, and there are a few things I don't like. Despite Origins being set before the other games, Batman has certain gadgets that he didn't gain until partway through the events of Arkham City, such as the grapple boost and glue grenades (which function identically to Arkham City's freeze blasts). These are explained away a little too conveniently. Plus I think this game's story really suffered from the inclusion of the Joker. I liked Black Mask as a main antagonist during Batman's early days, he's a nice transition from standard gangsters to the more fanciful crooks he fights in his later years. The Joker segments are some of the most entertaining in the game, don't get me wrong, but they completely derail the plot, and I really liked the premise of "one night to kill the bat". The assassins don't have much to do in the story, outside of Bane and to an extent Deathstroke. I would have much preferred a focus on them and a look into Batman's internal struggle with his mission rather than a Joker origin.

But still, forgettable as it is, Batman: Arkham Origins is a fun time. The combat and stealth are the same as they were in the previous games, which I'm happy with. If it ain't broke, don't fix it. Considering its lack of Christmas-themed competitors out there this would still be my number one choice for a festive video game. If you're a fan of the other entries and have been holding off on getting Origins, then I'd absolutely recommend going for it. 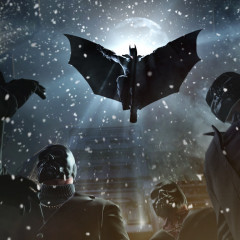 Continuing on our Christmas retrospects comes one of the few video games set during the festive season, Batman: Arkham Origins.