Samuel Selvon published his novel The Lonely Londoners back in 1956 as a reflection on the lives of immigrants in contemporary British society. It's contemplative, rich in atmosphere, and well worth a read.

The Lonely Londoners follows a number of immigrants from the West Indies, who came to London during the post-war period. It's a fictional depiction of the Windrush generation, a title given to people from Caribbean countries who emigrated to Britain between 1948 and 1971. Taught that they were citizens of the Commonwealth, a large number of them believed that they would be welcomed with open arms. Many had fought for Queen and country during WW2, a fact often overlooked in the history books. But despite these factors, many members of the Windrush generation faced difficulties in finding housing and stable work. Newspapers at the time described a tidal wave of immigrants, riling the masses up against these 'invaders'. There was no small amount of negative feeling towards them.

This is the situation that The Lonely Londoners protagonist Moses Aloetta finds himself in. Living in London for a decade already, he made a name for himself as the man to speak to when you're fresh off the boat from the West Indies. He grudgingly finds room and board for new immigrants, and does what he can to find them work. From the very start he's a lovable protagonist. No matter how much he gripes and moans about how he can't go on helping these strangers, and calls them hard-headed for thinking they'd find a better life in England, he'll always help them out. Even though the flat he lives in is small, and his wallet is light, he'll always find something to give.

So the story follows Moses and his antics, over the course of several years. It also, through his perspective, documents the lives of several other men from the Windrush generation, who Moses affectionately refers to as 'The Boys'. There really isn't a plot to speak of, or at least, not a conventional one. Time passes and the tone changes with the seasons — Moses feels the most homesick during the winter — but there isn't an underlying narrative, things just happen.

The novel does feel lonely. The characters seem to drift around the city, always isolated from society no matter how long they've lived there. The loneliness feels most potent during Moses' periods of depression, when he starts thinking about what life is like for him and 'The Boys'. He never seems to get severely emotional, just brooding. He feels for his friends, he knows their lives are tough, but none of them seem to be able to help each other. They lend money, offer work, give each other a place to stay when it's needed, but none of these things are permanent solutions. The city doesn't accept them, so all they have is each other, but they can't give each other what they truly need — the means to a better life.

Social mobility is all but non-existent for the lonely Londoners. Perhaps this is why there is no real plot to speak of. The characters can't progress in their careers (and therefore, their personal narratives) because no one wants to hire them full-time. Prejudice and racism keep them from finding better homes, better jobs, even from settling down and starting a family. Most of the women they meet fetishise them as Black men, at one point one of 'The Boys' discovers his girlfriend has zero intentions of introducing him to her family, despite promises to the contrary, and is only interested in him for, well, 'a good time'.

But despite all the low points, Moses can never work up the determination to abandon the city. Every year he thinks about returning to Trinidad, and every year the snow thaws, the sun brightens, and he falls in love with London all over again. It isn't exactly contentment, but it's not delusion either. Because of Selvon's poignancy-laden prose, and beautifully written characters, he is somehow able to display both the negative, and the romantic aspects of London life. The lives led by 'The Boys' are eclectic, impassioned, and varied. They know each other intimately. They face many trials, but they always resurface with good humour. There isn't really a right answer; stay in London or leave. All they can do is live their own lives. A bittersweet novel, but an immensely evocative read.

Header Image Credit: "The Lonely Londoner" by Dexters Lab is licensed under CC BY 2.0 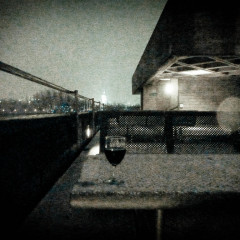 Samuel Selvon published his novel The Lonely Londoners back in 1956 as a reflection on the lives of immigrants in contemporary British society. It's contemplative, rich in atmosphere, and well worth a read.