Five of our favourite tracks released this week. Check them out, and let us know what you think!

Mitski - The Only Heartbreaker

Critically acclaimed alternative rock artist Mitski has returned with her latest single, ‘The Only Heartbreaker’. The song is the first single to come out from the musician’s sixth upcoming LP, ‘Laurel Hell’. The track is as personal as you would expect from an artist such as Mitski and features more reserved sections as well as her now-signature explosive fuzziness. What is most interesting about the track is how Mitski is making a departure from her renowned sound, opting for a more synth-laden 80s tinged style to her composition. With so many artists adding these elements as of late, it could have been hard for Mitski to stand out as she has done prior. However, the song is certainly a powerful, melancholic and thought-provoking one. It is focused on the collapse of relationships and ultimately, the understanding that she may be the cause. ‘The Only Heartbreaker’ is sad and dark yet still has danceability, expertly showcasing the beauty coming out of chaos.

Pinegrove have recently released a single titled ‘Alaska’, after announcing their next record, ‘11:11’, the band have been making waves within the indie scene through their past releases, and The new single doesn’t disappoint. They have managed to concoct yet another wonderful, folky song that focuses on the intense travel, tiredness and disorientation of working as a touring band. Pinegrove’s inane likeability is inescapable. The band are easy to relate to thanks to their no-nonsense lyricism and direct messaging. They have cultivated their sound to a point where they exert a great sense of positivity and always manage to uncover the wholesomeness within the turbulence. As the track energetically gallops through it’s runtime, lo-fi vocals and bouncy guitar are in abundance, conveying a sense of friendliness and hopefulness. Pinegrove expresses how thankful they are for their position, despite the taxing lifestyle they lead.

UK rap artist BERWYN has released a new single named ‘MIA’, which delves into the Trinidad-born, Romford-raised artist’s psyche and his struggles with insomnia. ‘MIA’ focuses on the sleepless nights BERWYN endured thanks to his very personal experiences, such as the deaths of those around him. The track will be released within a mixtape named ‘TAPE2/FOMALHAUT’ and makes a poignant splash. Accompanied by an Afrobeat style backdrop, BERWYN’s flow is relaxed and subdued, but his lyrics are far from that. The rapper has a unique style that stands out from those around him, as he strings together bars that are not complex but incredibly well structured. Instrumentally, the track is abundant with interesting changes, which make it engaging throughout. BERWYN is certainly an artist to watch over the next few years, as the rapper is finding his voice, and the reception is positive and ever-growing.

Silk Sonic - ‘Smokin Out The Window’

Bruno Mars and Anderson .Paak’s collaborative effort, Silk Sonic, have finally released their album, ‘An Evening with Silk Sonic’ this week. The final single to be shown before the album’s release is ‘Smokin’ Out The Window’. The song is a glitzy, smooth romp, one that demonstrates the sheer talent of both artists, who are arguably within their creative prime. The track sounds almost dated, like something from Marvin Gaye or even Frank Sinatra, but with added funk and RnB elements that help to give it that lounge-like feel. Both vocalists showcase their impressive singing chops on the song, as to be expected, effortlessly layering over each other with hip-hop style ad-libbing and more soulful belting. The instrumentation is precise and sonically covers a large range of bases, thanks to the multitude of instruments used, including more classical elements that give a retro sheen. If there was anything good to come from last year’s pandemic, it is certainly the all-star team-up that is Silk Sonic, who may have just released one of the best records of the year.

After COP26 has been dominating headlines over the past couple of weeks, many songs have been released that have coincided with the climate change conference. This is an attempt to raise awareness about the effects of carbon emissions on our planet. Jarvis Cocker is now one such musician collaborating with EDM artist Riton under the name Gucci Soundsystem. The track sounds huge, mainly down to its heavy bass and driving percussion. Cocker’s lyrics are conveyed in a spoken word fashion upon the barrage of beats. The track is strangely upbeat, almost club-like, but is incredibly interesting and works rather well. Cocker’s spoken word feels quite eerie, and his vocals could be likened to Trent Reznor of Nine Inch Nails. The chilling style brings an immediacy to the issue of global warming, and alongside the heavy electronic sounds, it truly encapsulates the dread that many feel about our changing world.

All tracks featured in this article can be found on our Spotify Playlist. 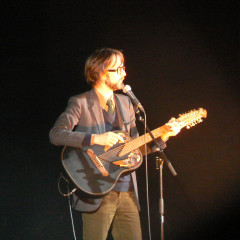 Five of our favourite tracks released this week. Check them out, and let us know what you think!