Now that the final character for Smash Ultimate has been released, let's take a look at what some consider to be the low-point of the franchise, and talk about why they're wrong.

Fans of the Smash Bros franchise, a platform fighter that pits gaming icons like Mario and Pikachu against each other, often describe the third installment — Super Smash Bros Brawl — as a hot mess. This is true. But it's also a severely underrated gem.

People heap a lot of praise on Smash Ultimate, and deservedly so, but for my money, Brawl isn't far off in terms of quality. It equals Ultimate in a lot of ways, and surpasses it in others.

The roster, first of all, was crazy at its time of release. Almost 40 different playable characters meant this was easily one of the biggest fighting game casts of its time. It also marked the introduction of third-party fighters into the franchise. Sonic the Hedgehog and Solid Snake from Metal Gear Solid were the first non-nintendo characters to grace the character selection screen, and that fact alone solidified the franchise as the go-to source of impossible crossovers.

The stagelist also more than doubled compared to the game that preceded it. Some of the staples of the franchise were added, including Halberd and Smashville, each one with iconic music and excellent visual design. The art style took an interesting turn in this one, particularly with the characters. This is the one game in the series where they opted to go for realistic textures and let me tell you, if you haven't witnessed the intricate pattern of Luigi's denim overalls getting punched by Charizard's weirdly leathery fist then you have not experienced Smash Bros. Every detail (well, almost every) was made with a level of care that the franchise has become known for.

Or why don't we talk about all the different single player modes you can play in the game? There's All Star Mode, Boss Rush, Break the Targets, Challenges, Events. And that's just the tip of the hitbox. Two words. Subspace Emissary. Subspace emissary was Brawl's story mode. This was my jam back in the day, I'll still replay it now and again when I get hit with a dose of nostalgia.

Subspace Emissary was the first time the developers decided to integrate a dedicated story mode in the franchise. It was an obvious choice in hindsight. Collecting all these legendary characters together in one place and not having them interact would be criminal. The developers went hard on this. The story follows the various videogame characters coming together in small groups and slowly uncovering a wider threat that eventually unites them all together. There are 104 cutscenes in total, each one filled with the type of hype that only comes from seeing characters you never thought would ever meet, interact with each other. Avengers: Infinity War may claim to be the most ambitious crossover, but its throne is built on lies.

I can't list the number of moments in the story that had 8-year-old me reeling. Seeing Samus save Pikachu from a secret lab, or gasping when Ganondorf betrays Bowser at the last second are some of my fondest gaming memories. But the absolute pinnacle of the story mode had to be The Great Invasion. This is a cutscene that shows the combined effort of (almost) every smash fighter launch an attack on the villains' main spaceship using a mismatched combination of iconic air vehicles from a number of different franchises. Visually stunning and with the perfect use of the main theme, I'd strongly recommend checking it out on YouTube. It can still give me goosebumps to this day.

There is one glaring complaint about Brawl that I have so far tried to skirt around, but to talk about I'm going to have to reveal how much of a nerd I am.

Competitively, this game sucks. That's not just an opinion, that's an engineered fact. Nintendo are notorious for not supporting the competitive scene, and in Brawl they took that to the next level. There are mechanics added to this game specifically to make it less competitive. They removed wavedashing, made combos all but nonexistent, and slowed down every character. When you run in this game there is a chance for you to trip and fall down entirely unprompted. Why? Who is this for? Why did Mario just get a faceful of cold, hard floor for no other reason than he tried to sprint forward a little too suddenly?

It's not as if having a decent competitive backbone makes the game less universally enjoyable. If you don't care about the technical stuff you can still have a great time with the items and wacky stages. That's how I did it when I was little. Button mashing is a valid way to play; it's chill to just chill. But I don't get why it should only be catered to one type of fan. This game came out after Super Smash Bros Melee for crying out loud. The definitive grassroots competitive fighting game. 20 years old but still evolving. Want to know who's still playing Brawl in tournaments? Me too. Masochists probably.

But enough of my jaded bitterness. For all its flaws this is still one of my favourite videogames of all time. Ultimate, in my opinion, is clearly the definitive Smash title, but without Brawl there'd be a massive empty hole in the franchise. It's the weird one, the dark horse, and whilst some ridicule it, I think the majority of fans look back fondly on the unique experience and feel the desire to play it again, just one last time. 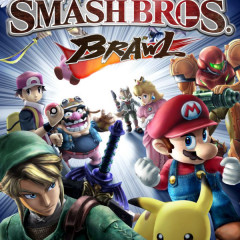 Now that the final character for Smash Ultimate has been released, let's take a look at what some consider to be the low-point of the franchise, and talk about why they're wrong.