Founded on January 12, 1959, by Berry Gordy Jr., Motown Records still stands today as one of the most important music labels in the world. Back in its origins, it was the home to a new, original sound: one that combined elements taken from Soul music, R&B, and Gospel. Over time, this style spread throughout the industry and even got its name: "Motown Style". Although the label's success wasn’t immediate, it eventually became an icon of this new style and its main exponents, such as Michael Jackson, Lionel Ritchie, Gladys Knight & The Peeps, and many others.

The headquarters were built by a team of songwriters - including Gordy himself - producers, and the house band, "Funky Brothers". The role of the band in the birth of the Motown sound was crucial: they made the arrangements that characterized this new branch of soul and gave it its particular sound, instantly recognizable and enjoyable.

A small company with increasing popularity

By the late 1950s, Motown had managed to find its place in the airwaves, reaching a large number of listeners. It was their proposal of a new, refreshed, and modified Soul that got them to the heart of teenage audiences. Along with The Beatles, by the 1960s, it had become the North American young public's favourite. Soon, the label became the home to hit after hit, made by incredibly successful solo artists like Marvin Gaye, Stevie Wonder and young singing groups like The Marvelettes. Certainly, the label's success was due to its incredibly talented musicians and producers working behind the console. Many of them then became very famous over time, like Brian Holland and Lamont Dozier.

By the 1960s, the increasing fame of the company and its artists got Motown records to reach its most prolific stage, with high rates of success for its hits - with higher figures than any other company in the industry’s history. The arrival of the Motown singles to the Billboard charts was just a reflection of the popularity the label was reaching, with nearly 50 singles heading the chart's "Hot 100".

The coming decade of the 1970s found the company with fewer key artists. Still, groups like the Jackson 5 and solo artists like Diana Ross kept the company’s numbers afloat. Nevertheless, Motown Records still had another major hit to release. "What's going on?" by Marvin Gaye would soon become the icon record of Motown Style.

The impact on the music industry

The creation of Motown records as a company that provided a space for Black artists, was essential for developing a new music style. With strong foundations in Soul music, these artists developed their musical genius by working hours in the studio, making arrangements and changing the orchestration of the traditional Soul genre. The Motown style rapidly consolidated a signature sound: especially danceable rhythmic patterns, a steady four-beat tempo, memorable vocal melodies, funky baselines, and a predominance of strings and winds. The development of all these elements laid the foundations for pop music as we know it today. Artists like Bruno Mars, Dua Lipa, Daft Punk, Jamiroquai and Black Pumas incorporated Motown Style elements to their music.

Today, sampling is an increasingly frequent practice of digitally encoding music and reusing it as part of a composition or recording. Most artists choose to sample Motown hits to add them to their compositions, and most of the time, with incredible results. The possibility to fuse such an iconic and timeless sound like Motown with modern music enriches the musical genres and expands the possibilities of experimenting with the elements that build them.

Motown hits also influenced the production of musical covers; most of the best covers ever made are from one of these songs. Perhaps the best known are The Beatles’ cover of “Please Mr Postman”, originally by The Marvelettes and covered by The Carpenters too. Another is David Bowie and Mick Jagger’s cover of “Dancing in the Street” by Martha and The Vandellas, and Creedence ClearWater Revival’s “I heard it through the grapevine” by Marvin Gaye.

Certainly, the sound of Motown changed a whole generation and shaped the music that people in the future would listen to, ensuring a lasting impact on music as a whole.

Header Image Credit: "The Andantes- Motown's Premier Backing Vocalists in the 60's" by tomovox is licensed under CC BY-ND 2.0 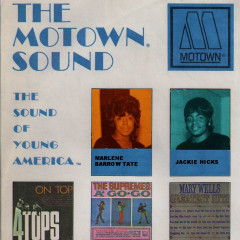 "The sound of young America": a take on Motown Records