Our round up of some of the best music to be released this past week. Check out our picks and let us know your thoughts.

All tracks listed, as well as those reviewed in this weekly segment, can be found on our New Music Friday playlist, here.

After eight long years of no music releases, Belgian musician Stromae (Paul Van Haver) finally returns with a track that is as explosive and unconventional as it is a masterfully composed pop track that still expresses Stromae’s avant garde nature. The track, named Santé, is a reflection on health and those who work within the healthcare sector. When translated, the lyrics celebrate the workers who don’t get the thanks that they deserve after saving lives. Instrumentally, the track itself starts out with an upbeat flamenco-like guitar passage, which transforms into a dance track through the use of afrobeat drum patterns and screeching synths. The track is slightly abrasive, but in a pleasant and palatable way. A particularly interesting aspect of the track is when these synths appear in the main hook. The pattern seems slightly slowed, lazily adding a strange swing to the song. Even though Stromae uses fairly simplistic instrumentation, it is the way in which the sound is mixed up with differing genres and warped timings that really brings out the individuality of the artist.

Mac Miller - Inside Outside

In yet another posthumous release, Mac Miller’s team has compiled the tracks from his 2014 mixtape, Faces, and have re-released it, so it is now available through streaming services. Many tracks off the older tape have not been heard by even the most staunch Mac Miller fans, so the addition of the record on streaming platforms is a welcome one to be sure. Tracks have been adapted further in the re-release, with rappers such as Schoolboy Q, Rick Ross, and Vince Staples all lending their talents in its features. Inside Outside is the introductory track on the project, and sets the tone of the record as a whole. Although the instrumentation of the track is rather upbeat, Miller’s lyrics convey a darker theme. In the first line, Miller states “I should’ve died already”, this sets the precipice for where the rapper’s mind was at during recording. Inside Outside is an introspective look into Millers psyche, and knowing about the artist’s suicide brings an added depth to the words. It is heartbreaking to hear of Miller’s mental health struggles, but the track and indeed the album will help to further shed light on the issue, and the tracks themselves are all very good.

In a diversion from the band’s usual sporadic and experimental approach to post-punk, Black Country, New Road manage to further evolve their sound into a more accessible and almost catchy direction. Chaos Space Marine is a track that's structure can be likened more to a pop song than the band’s usual work. Although simplified structurally, the track is still fantastically performed, with some incredible technical playing on all instruments, but seemingly always placed in areas where the sounds will make the most impact. Whether it be a loud toot from the saxophone or a twinkle on keys to round off a bar, the group consistently throws in a new and unforeseen sound that always feels necessary, no matter how chaotic it may seem to be. There is a feeling that the band aren’t as quotable or lyrically profound on the track, but the instrumentation definitely makes up for whatever the track lacks vocally. A particular highlight of the track is the slamming drum section towards the end, which adds a wonderful immediacy to the tracks conclusion.

In his first release since 2019’s album, aptly named Kiwanuka, Michael Kiwanuka has returned with a new single that goes by the title of Beautiful Life. The track is a reserved affair, and was written to accompany the Netflix documentary series Convergence: Courage in a Crisis, which aims to highlight nine separate cultural stories that are all linked by the Covid pandemic. Kiwanuka has stated that the track is attempting to convey the “strength in human spirit” and bring some positivity out of the awful things that had happened all around the world during 2020. The song is a slower, more ethereal, theatrical, and grandiose track, with emotive lyrics that are incredibly moving and uplifting, which strikes feelings of hope and strength rising through despair. Instrumentally it is fairly sparse, but Kiwanuka’s deep and calming vocal is backed by a regal string section that helps to convey the weight of the message at hand.

The longest track on the list this week, Animal Collective’s Prester John rounds out at over six minutes in length, and is a track that is made up of two conjoined ideas, from members Avey Tare and Panda Bear respectively. The track is spacey and psychedelic, leaning into the absence of sound and trance-like sensibilities of the genre. The introduction is drawn out, which makes the evolution of the track more substantial. Letting the track breathe like this can only be done successfully by the best musicians, knowing exactly where to place sounds and escalate them, and Animal Collective do it in a wonderful fashion. The track incorporates elements of soundscape, adding unconventional noise samples here and there, but only as flavour to the consistent drum groove and sparse twinkling keys. Vocals are layered up and sung in a gang, mostly falsetto so that it cuts through the slight fuzziness apparent in the instrumentation, but also adds to the spacey, more lo-fi vibe that the band seems to be attempting. 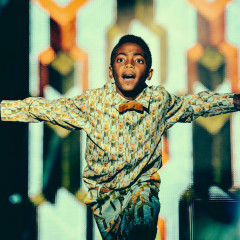 Our round up of some of the best music to be released this past week. Check out our picks and let us know your thoughts.